Who can tell better about Novocortex than the international press? Some of our campaigns, games and virals managed to get coverage in TechCrunch, the Huffington Post, Sports Illustrated, Engadget etc. The Endless Racing Game even made it to the Guinness World Records Book, and Scratches on Your Car was featured in marketing study books for universities. Read articles about Novocortex and our work below. 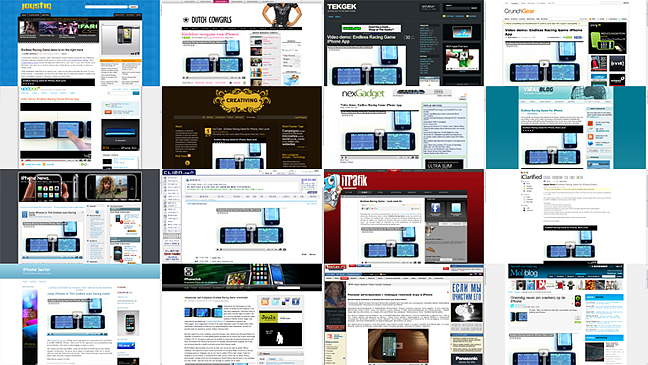 We love outrageous, weird and insane Japanese TV shows. That’s why Novocortex is extremely proud that our World Championship Jala Neti viral was aired by two major Japanese TV stations – TV Asahi and NTV. Frankly speaking, we enjoy the Japanese version even more than the original. The viral had over 1 million views on YouTube and was shown on TV in Japan, Australia, US and other countries.

02 Campaign of Novocortex in the Guerrilla Advertising book

Our campaign for VV Car Insurance Scratches on You Car was featured in the Guerrilla Advertising book written by Gavin Lucas. Novocortex placed removable stickers with scratches on expensive cars, filmed reactions of car owners and invited blog readers to test the stickers on their friends. This is how we appeared in the Guerrilla Advertising book, together with The Fun Theory, Whopper Sacrifice, Earth Hour and other iconic guerrilla campaigns.

03 The Aqua Maris viral in the Russian Top 10

The World Championship Jala Neti viral, made by Novocortex and Wefilm for the Russian nasal spray Aqua Maris, was included in the Top 10 Russian virals. President Putin, drunk squirrels, naked girls and angry babushkas – our Jala Neti champion Fedor Konyukhov is in a very good company. If you don’t speak Russian, watch a video in English about the new sport created by Novocortex – Competitive Nose Cleansing.

Novocortex has finally made its contribution to the world of education. Our guerrilla marketing campaign Scratches on You Car was included in a new book for marketing students of Dutch universities – the Basisboek Marketing Communicatie by Esther de Berg. You will find us in the Guerrilla Marketing chapter, right after the Bavaria Dutch Dress campaign. Buy the book or save money and read about Scratches on Your Car on our site.

After we helped Russians to win the 5 litres final of the World Championship Nose Cleansing, as well as to find the right candidate for the Best Job in Russia, we decided to produce something more serious and even scientific. Our latest project is the YouTube channel about biology and ethology Just Like Other Animals, where we tell stories on the origin of people. Read an article in The Village about Just Like Other Animals (in Russian) or an interview with Evgeniya Timonova in Bolshoi Gorod (you guessed it – it’s also in Russian).