The Croatian company JGL asked Novocortex to activate their Aqua Maris brand in Russia. Aqua Maris was the only nose spray on The Russian market made of the Adriatic seawater. We decided that the brand story should be told in Croatia by someone who actually uses the spray and can explain advantages of natural seawater sprays over chemical vasoconstrictors to a broader audience. To find the brand ambassador for Aqua Maris, we launched The Best Job in Russia campaign in social media. 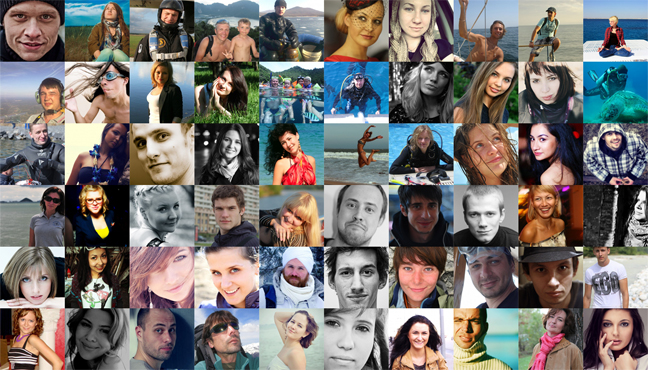 01 Finding the right candidate for The Best Job in Russia

First of all, we launched a website of the Aqua Maris Institute where we published scientific articles about health benefits of seawater. Then, we advertised The Best Job in Russia – Consultant of the Institute – on job boards. Main requirements to candidates: be ready to sail, dive, swim in the Adriatic sea and show us your ability to tell stories in social media.

The Aqua Maris Institute received 899 applications (see photos of the participants above). The participants mobilized over 200.000 friends and followers on Russian social media. Video motivations of the best candidates, selected after job interviews with them, were placed on YouTube. Authors of the most convincing motivations reached the final in Moscow. In the first stage, 3 finalists did a knowledge test. In the second, they were asked to convince random passers-by to cleanse their nose with seawater. Evgeniya Timonova won the final and went to Croatia.

In Croatia, Evgeniya created video reports and wrote stories about her work at the Institute and about the Adriatic sea – from finding shark eggs and searching for bottlenose dolphins in the open sea to analyzing seawater samples in the Institute’s lab and explaining the production process of Aqua Maris. A quote from the final report written by Evgeniya: “I can not say that I liked my job. Because it would sound like buying a zoo ticket, getting an African wildlife safari instead and saying after that – I liked it. It was really incredible. In-cre-dible”. Watch a video about the social media campaign Best Job in Russia.

The Best Job in Russia campaign reached over one million people on social media and job boards. We managed to involve over 200.000 people in a dialogue with the brand (based on the stats of Google Analytics and YouTube). Aqua Maris received videos and stories about their brand created by real people, full of real emotions, shot in places where the nose spray is made. The results were so convincing that Aqua Maris asked us to produce a sequel – The Best Job in Russia II – focusing on environmental projects supported by the brand. From sponsoring dolphin conservation in Croatia (watch a video below) to beach cleaning initiatives in Russia. We generated so much buzz that searching “лучшая работа в россии” (best job in russia) in Google and Yandex still leads you to information about the Aqua Maris campaign.

04 Other social media campaigns by Novocortex

See how we used social media in other digital campaigns by Novocortex – in the viral campaign World Championship Nose Cleansing in Russia, in the guerrilla marketing campaign Scratches on Your Car, and in our crowdsourcing campaign for 24h Translations. Read our article (in Dutch) about social media in Russia – VKontakte, Odnoklassniki, LiveJournal, Facebook.